In our short time living in Germany, we’ve found more celebrations here than anywhere else we’ve lived (Philippines, Hong Kong, Alaska and 5 states in the lower 48).  Between Oktoberfest, Christmas Markets, Carnival, and spring Mai-fests there is always celebration happening or preparing to happen. Important to note that these aren’t one day events but rather month long events (Carnival lasts nearly 4 months).   About the time Carnival winds down spring Maifests kick in because you can’t just open a beer garden for the summer time. Obviously there should be month long celebration preparing for the summer opening of the beer gardens. The beer gardens keep the celebration rolling all summer which brings us back around to the start of Oktoberfest and it all repeats itself. So pretty much a year round ‘fest’ here in Germany.

We managed to hit 4 or 5 really good Christmas Markets this year so we decided to give Carnival ‘a shot’ (bit of a pun here as you’ll see)  as well. I wasn’t sure how people dressed and what exactly the celebration included but we googled some pictures and decided to skip the parades and opening ceremonies (you know how we hate crowds) but instead decided to join a celebration at one of the local brew pubs in Bonn that we had been to before.

I dug through a costume rack at the local Rewe grocery store and found a few things we could make work.  We read the crazier the better so crazy we did.
See photos below…(also note these pics were taken around noon, quite a festive crowd so early in the day!)

Here’s what I learned about Carnival, don’t show up if you’re not in costume!  in fact half the fun was the subway ride too Bonn and seeing 5 to 10 new costumes boarding at each stop (Hong Kong would be 100 each stop but that’s a different blog story). Everyone is dressed up, it’s like a Halloween party for adults…that lasts 4 days.  In the restaurant/ bars, all chairs are removed to allow more room to dance! You’ll need to hit one of the street food vendors along the way as the restaurants are only serving liquid refreshments during Carnival.

You need to know these fabulous people are serious about their Carnival party!  Bartenders were walking around pouring shots right out of the bottle into the open mouths of carnival goers.  We managed to avoid the bottle but with every beer we bought we were given a shot. The first time these little plastic shot cups were put in our hands, both bartenders raised their shot glasses in a toast.  I don’t normally do liquor but not wanting to be rude Woody and I picked up our glasses, cheered and dramatically threw back the shot….nothing….no fire water assaulting the throat, instead just laughing bartenders as we inspected our gravity defying upside down plastic shot glasses.  Trick shot glasses?…Nope… Turns out they were Jello shots…yes, that was our first ever! Anyone that knows me KNOWS I hate liquor and I don’t eat sugar but hey, when at Carnival…..

Europe may lose in days of sunshine per year but wins in number of celebration days!

Take some advice from a Dumb Blonde, when in Germany embrace the celebrations, you’re bound to be here during one of them no matter when you come because there’s always one more celebration.

We’ve been traveling all over Southern Europe for the past 6 months staying in hotels and Airbnb.  We love that many of the places we stay in Europe have king size beds with TWO comforters on them! It’s brilliant, we get to sleep together in the same bed but he can’t still the covers!  EU wins!

What we don’t like is the great big square pillows!! Your head takes up a small portion of the pillow but the pillow takes up a huge portion of the bed.  It seems like all the stuffing gets rearranged above your head during the night, leaving you about an inch of feathers to sleep on. US wins!
Guess we’ll call it a tie! 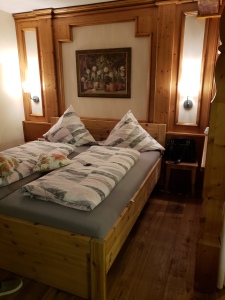 Woodman’s beer loading demo highlights EU’s weak beer packaging…..(only one beer was hurt during the making of this video).  US may win beer packaging but EU wins best beers!

Woodman’s valentine gift (minus 18 beers that were already in the beer refridgerator). 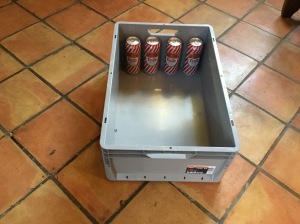 US carts might be antiquated but fixed front wheels are much easier to maneuver…Woodman demonstrates how all wheel drive on Europe carts = all over the parking lot.

Starting off the Euro vs US observation on Super Bowl Sunday.  It’s not always easy to find the channel that is showing the game or to stay up till midnight to watch it, but then again if you’re into Jockeyless Camel Races you can find them on several channels here in Europe.

If it’s football you’re looking for then US wins!!